For my next project I want to introduce a new challenge for my reinforcement learning agents. Being the only agent in a fully predictable universe may be a bit boring. It's way more exciting if there are other agents who can aid or obstruct your moves.

To do this I need a simple framework for creating environment / agent interactions when multiple agents are in one environment.

The framework has the following requirements:

When I have a good framework it would be easier to train agents to play interesting multiplayer games.

In my LunarLander post I used OpenAI's definition of an environment. This environment is built around a single agent getting observations, performing actions and getting rewards; the classic Agent-Environment loop.

So why can't we just use this environment definition for multi-agent games?

In theory it would be possible to create multi-agents games using this definition, but it would be tricky. You could have multiple agents interacting with one environment, while thinking they are the only one interacting with it. But then the environment needs to know which agent called the step function or the reset function so it can give a response for this particular agent. Also the response to the step function could be delayed, because another agent is choosing which moves to make.

To solve these issues I am going to define a framework more suited to multi-agent games.

For the multi-agent environment I am going to take away a bit of the power of the agents. They don't get to decide everything anymore, because they have to share the environment with others. Instead the environment itself is going to lead the game.

Agents that are passed to the environment can be of any kind, even human players. The only requirement is that they can respond to action or done requests.

The agent definition is going to look as follows. The action function is a request for an action in a specific situation. The done function tells the agent that the game is finished.

When an environment asks an agent what it wants to do by calling the action method the agent gets an observation, a list of allowed actions and a previous reward. The observation can be specific for this agent. For example in a card game both agents can only see their own hands, but not the hand of the other player. Allowed actions is a list of actions the agent can choose from. Previous reward tells the agent if they got a reward or a penalty from its previous action.

First let's implement the environment. Both players take turns simultaneously and have 3 possible moves: rock, paper or scissors. The agents respond by replying which of the options they choose.

A very simple agent could just pick a random move.

A game is then played as follows

Now I have a simple framework for creating multi-agent games the next step is to implement a more interesting game and use a reinforcement learning algorithm to train multiple agents to play this game. 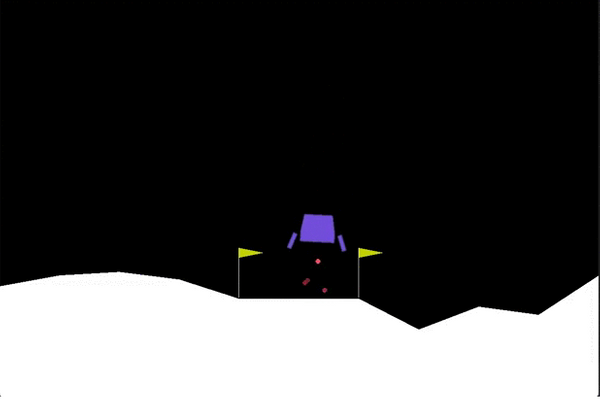