In Februari 2015 the artificial intelligence company DeepMind published an article in Nature showing they can solve a number of Atari games using Deep Q learning. The amazing part of this is that they didn't create a compact representation of the state of the games. They trained their algorithm purely on the pixels visible on screen and a score. Using this approach they get a better result than all the previous algorithms available, and manage to play 49 out of the 57 games to at least the level of a professional human game tester.

Since reading about their result I have been tinkering around with reinforcement learning. I managed to create some working implementations, but they were never very stable. They learned how to solve a problem, but then after some more training they would oscillate out of control and end up having to learn everything again. An infinite cycle of success and failure. This time I set the challenge for myself to solve the problem, but to also solve it in a way that can maintain its results; A robust deep Q learning algorithm.

The goal of lunar lander is to land a small spacecraft between two flags. At every time step you have a choice between 4 actions: fire your main engine, your left engine, your right engine or do nothing. If the spacecraft hits the ground at the wrong angle or too fast it crashes and you get a large penalty. You also get a small penalty for firing your main engine. You get rewards for getting closer to the desired end position, and for touching the ground.

The environment is considered solved if the agent manages to get a score of 200 or more on average in the last 100 episodes.

Q learning is an implementation of a reinforcement learning agent that learns about the environment and tries to maximize the expected reward gained.

Q(s, a) is a function that predicts the future reward in state s when taking action a. If your model is accurately predicting these Q values the agent could pick the action with the highest Q value to maximize its reward.

The values explained in more detail:

The simplest implementation of Q-learning uses a table to hold all the values, but this quickly becomes infeasible for environments with many possible states or actions. By using a (deep) neural network to represent the Q(s, a) function the agent can generalise to never seen combinations of (s, a) better. The input for this neural network is an observation and the output is a Q value for every allowed action in that state. We call this implementation deep Q-learning.

Deep Q-learning can be quite unstable. Without any tweaks the algorithm can oscillate between good and bad solutions or fail to converge at all.

DeepMind used some additional tricks to make sure their deep Q-learning algorithm converges towards a good solution. In my implementation I am going to implement the following additions.

Reinforcement learning is always a struggle between exploration and exploitation. If you always select the actions you think are the best (exploitation) you might never discover that there are better alternatives. If you explore too much you may never reach the better solutions.

I am going to implement e-greedy action selection. The idea of this method is to have a value between 0 and 1 that determines the amount of exploration vs exploitation. If the value is 0 the agent will always choose the action it thinks is the best one, if the value is 1 it will act completely random. The value starts out high and decreases over time. In the beginning the agent does not know anything about the environment, so it should explore as much to discover the effect of its actions on the environment. As the agent learns more it can start to exploit good strategies.

In the standard Q-learning algorithm the agent learns after every time step, all past experiences are thrown away.

With experience replay we save all state transitions (state, action, reward, new_state) so we can use them for training later.

The advantages of using experience replay are:

For a detailed explanation read this blogpost by Rubik's code.

\( Q(s, a; \theta) \) means the Q(s, a) value according to model \(  \theta \), so the target is the reward plus the Q value of the target model with the best action in state the next state according to the main model.

Using mean squared error (mse) as loss function might lead to very high errors when training. These high errors can cause the model to over-adjust and fail to converge to a good solution. Huber loss is less sensitive to outliers because it is exponential only up to a certain threshold and then becomes linear.

I implemented the algorithm on Google Colab where certain dependencies like Tensorflow come pre-installed. If you want to replicate this code on your local machine you will have to install some more dependencies than I show here.

First we are going to install box2d. This is necessary for running the LunarLander environment.

Then we install the necessary modules.

We create the LunarLander environment and check how large the state space and the action space are.

The state space describes the number of variables the agent can observe. Since we use observations as input for the Q-learning network this determines the number of inputs our model needs to have.

The action space describes how many actions are possible. For every action we are going to add an output to our Q-learning network.

It prints out the following. An observation contains 8 variables and we can choose between 4 different actions.

Then we are going to create our model, but before we can do so we need to implement the Huber loss function. This might be the trickiest part of the implementation.

We implement this as a custom loss function using the Keras backend API. The function takes in all the predicted and true outputs for a batch of state transitions and has to calculate the average Huber loss over this batch. But there is a catch: Our model takes as input a state s, and as output the Q-values for all possible actions. If we want to update the model for a  certain state transition (s, a, r, s') we only want to calculate the loss for the output that belongs to the action a that the agent took to get from state s to s'.

We then create the model as follows. We have 9 input neurons. 8 for the observations in the LunarLander environment and 1 for the fraction complete. Fraction complete indicates how far the epsiode is to ending because of reaching its maximum number of steps. Say we have a maximum of 1000 steps and the current step is 400, then fraction complete is 0.4. This can be used by the agent to decide if it has to act fast, or if it can take it's time.

We can use this model to predict Q-values for a single state or for a batch of states.

These Q-values can be used to select actions. We use the epsilon greedy implementation like described above.

When we want to train the model on a batch of state transitions we need to calculate the target values for each of these state / action pairs. We do this using the double Q-learning technique where we use two models for calculating the target values.

We create a function to train the model using a batch of states and target values.

Then we create a function to make a copy of a model. We need this later to create and update the target model. The model is saved to a backup file, which is loaded into a new object. The copy of the model is returned. We need to pass the masked_huber_loss to the load_model function, because Keras does not know how to initialize the new model otherwise. The backup just has a reference to the loss function name.

Since we want to see how well the agent is learning we introduce some logging functionality. The AverageRewardTracker keeps count of the average reward over the last 100 steps. The FileLogger writes the results to a file after every episode.

Then we define the hyperparameters.

Finally it all comes together in the main loop.

When the training is done we can use the following code to visualise the training progress by loading the log file and plotting it using matplotlib.

Now it was time to see the model in action. To do this I loaded the last version of the model, turned off the training and rendered the results to the screen. It is actually working!

Although the model manages to get a pretty good score I still think it is quite slow at landing. In a future iteration of the algorithm I might add a penalty for taking too long.

I was asked a question about how to create the visualisations, and if they can be done in Colab. Here is my answer:

I didn't do the rendering on Google Colab, but on my local machine, because the OpenAI gym environment renders it in a window and this does not work in Colab.

Before you can run the script locally you need to have python and pip installed, and you need to install the following packages using "pip" https://pypi.org/project/pip/.

Here is a script that you can run locally to visualise runs of a certain model:

In the demo there is a line that says

Here you can enter the name of the model you downloaded. If you look at the output of the Colab script you can see the models that are saved on the checkpoints. I updated the code in the blog to save the models as ".h5", which is the keras format for saving models. The advantage of this is that it is a single file that you can download from your Colab environment.

If you download a model you can put it in the same folder as the "lunarlander_demo.py" script, adjust the filename to point to and run the script.The environments of OpenAI have a "render()" function which renders the current state of the environment to the screen. This is used to render the runs. 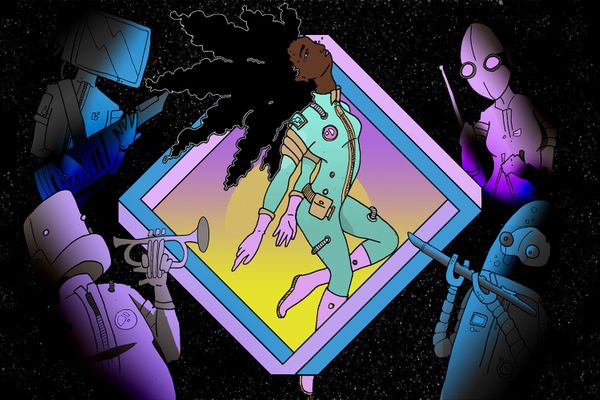 How we created a song for the AI Song Contest 2021 with the help of transformers and other music generation techniques.

A guide for setting up your own self-hosted Ghost CMS blog on Ubuntu 20.04 using Docker Compose.